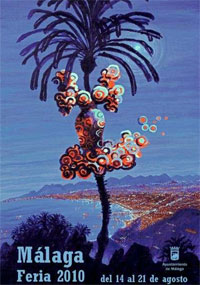 Tonight the locals and visitors to the Costa del Sol are starting engines for nine days of intense party with a fireworks show and a concert at the beach La Malagueta in Malaga city, which will begin at midnight and will last until the wee hours of the morning.

When the clock strikes 00:00, the magic and color of fireworks will take over the capital. More than seven tons of pyrotechnics are ready to get launched into the air tonight and illuminate the sky of Malaga.

The fireworks show is the result of careful planning and installation to achieve the synchronism between the pyrotechnic effects and musical pieces that comprise it, producing a real sense of beauty and synchrony able to create in the viewer a myriad of emotions.

For this end will be used 7226 kilos of gunpowder and pyrotechnic devices, which will create for 23 minutes more than 40.000 effects in the sky of Malaga. A spectacle not to be missed.

Everything changes in Malaga during these the nine days of Feria, since the party prevails over anything else.

The fair, which takes place from the 14th to the 21st of August, still has its two locations, the Day Fair in the city centre and the Night Fair on the fairgrounds.

Málaga airport arrivals well down in January,except for the Irish