For this winter season, they have reduced the daily connection to Gatwick from four to one, and maintain the weekly flights to London City

The tourist sector in Malaga this winter will continue to go without one route between Malaga and London’s Heathrow airport, which is the biggest connection point in Europe for international flights. The airline British Airways is not considering operating this flight again for the moment, which hasn’t been operative since last March, according to the information provided yesterday by the company. The entrepreneurs, and even the Mayor of Malaga, Francisco de la Torre, consider that it is essential that the capital of the Costa del Sol has at least one route to this airport, that connects Europe with the rest of the world. Furthermore, De la Torre has publicly declared that he has urged Iberia, who merged with British Airways, to thoroughly consider this petition as he stated that this destination cannot go without this connection.

The company stated that the flights to Heathrow are not part of the program this winter, that will commence on the 1st of November, that is already for sale in the different marketing channels available. In the new campaign, British Airways reduces the flights from Malaga airport to Gatwick from four, that were operating this summer, to one, but maintain the four weekly connections to London City airport, according to the information provided yesterday by the airline.

It’s worth mentioning that in October last year, this airline had two daily flights from Malaga to Heathrow, double of what was programmed last winter. On the 27th of March, this year, the British airline announced that they would double the daily flights that they were offering between Costa del Sol’s capital and the British capital. However, they were able to increase frequencies, up to four a day, but lost the connection to Heathrow, that operated two daily flights. 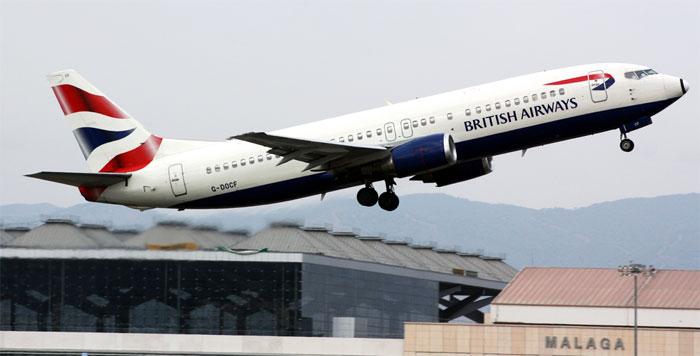 The tourist sector consider that this route is essential for all touristic activities, with a special interest towards incentives, congresses or meetings, that had a perfect connection from this airport to any corner of the world. Furthermore, the professionals on the coast assure that there is enough demand as there are plenty of low cost flights and traditional airlines with London, but none with Heathrow. For those British passengers that travel to Malaga, the terminal at Heathrow is a lot more convenient as it is situated nearer to the British capital and have better ways of transport available, as well as finding in this terminal, the widest range of connection offers to travel to other points of Great Britain.

For this winter, British Airways have decided to reduce the connections from Malaga to London, in relation to the flight offers in Summer, although this means an increase in relation to the winter season last year. In fact, the airline assured that the season that is just about to finish, has gone very well and that the amount of passengers have increased. “The seats on the planes have filled up very well. Malaga is a destination that always responds in a positive way“, they stated.

The company has the tickets for the winter season already on sale, and on the net, you can even purchase the tickets for next summer’s campaign, that will commence in April, in which British Airways for now will go back to the four connections with Gatwick, just like it has been this year.

Opening of the Automobile Museum in Malaga

The triumph of accesible Luxury