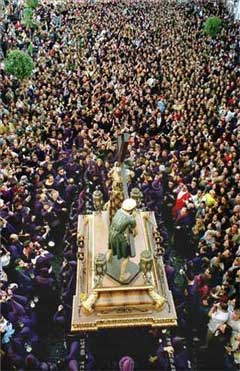 Malaga’s Semana Santa processions are famous – people cram together like sardines in the downtown area just to get a glimpse of the brotherhoods carrying religious images (tronos) on their shoulders. But since there are so many processions – each starting and ending at distinct spots around the city – and a record number of people, it can become tough to get from one to another or even attempt to see one in several spots of its traversal. Malaga’s urban bus company EMT is hoping to accommodate this influx of population by increasing the number of available buses, which will open an additional 45,000 seats per day. They will also make information available about the procession routes via electronic panels on the sidewalks, on each of their 250 buses, printed itineraries and SMS mobile phone updates. Sending the word TRONO to 7210 will cost you 90 cents, but you’ll know in real-time where the processions are.

EMT is putting its best face forward for the occasion, but last week it barely saved face from possible embarrassment and large loss of business. The workers had threatened to strike during Semana Santa, but agreed to the proposed salary increase over the next 4 years. The inter-city bus line Alsina Graells wasn’t so lucky, however. After the British company National Express purchased them in October, they announced some policy changes and staff cuts. So, the trade union CGT is planning a worker strike to start during Holy Week. It will take effect at 00:00 on Monday the 17th and last until midnight Wednesday, and a second period from 00:00 on Easter Sunday until 24 March.

If you’re looking for a reliable way to get around yourself, check out our cheap car hire options.