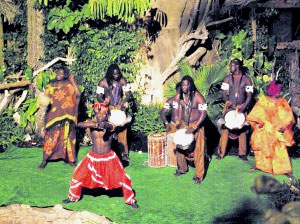 The vibrant rhythms of the African djembe or ‘talking drums’ of the Senegalese group Sicobana Africa are responsible for the unusual journey into the heart of the jungle that takes place every evening in July and August, except for Mondays, in Bioparc Fuengirola.

The sessions include spectacular African dance choreography and tribal percussion which show why the drums since ancient times are the soul of music making in the so-called forgotten continent.

This particular activity can be completed with a special dinner in the light of the candles for 35 Euros for adults and 15 Euros for children. Also during the summer, the exhibition opens its doors until midnight for Sumatran tigers, Malayan tapirs or pygmy hippos to surprise the visitors.

The popular Fuengirola Zoo, which last March changed its name to Bioparc Fuengirola, is presenting a new park model based on respect for nature and the preservation of their species.

The enclosure in which live more than 1,400 animals of 130 different species has an innovative architectural design called ‘zoo-immersion “, which introduces and immerses visitors in the habitat of each animal.

Young and old will spend an unforgettable day in the park because they can see many animals in a magical setting and know faraway places such as Madagascar, Equatorial Africa and Southeast Asia.

The tour through the Bioparc Fuengirola begins on the island of Madagascar, with a massive baobab tree 25 meters high, which has become the icon of the compound and one of the largest artificial trees in the world.

There are a variety of spaces with wetlands, forest floor, the valley of the gorillas and the mountain forest. There is as well a space set in Southeast Asia where are living tigers, orangutans of Borneo, cockatoos, squirrels … This area also has an excellent reproduction of a mangrove swamp that has earned the award for best European site.

The main objective of Bioparc Fuengirola is the conservation of the environment and animals through the reproduction of the species. Some of the most important births occurred in the park have been of emblematic species like the Sumatran tiger, included in the Red List of Threatened Species with the highest category of “critically threatened”. Currently, only 250 animals are free in their natural habitat.

The Spanish Opt for Home Territory in Easter Trips

Fair of Epoch in Marbella

More than 500 residents already have the Guide “Living in Benalmádena”