The only tram that Malaga has ever had in its history (which was working until December 31, 1961) is being restored by a group of workers of the EMT (the main transport company in Malaga). 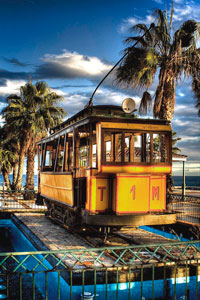 Yestarday morning the old tram was picked up from Malaga’s promenade by a huge crane.

This is the last tram left in Malaga and it is the unique silent witness to the history of this kind of transportation which operated in Malaga until the early 1960s. It has been for over 40 years one of the most representative symbols of the capital, parked during 57 years at Pablo Picasso’s promenade. But yesterday, the old tram began a new journey in order to recover its original state after the damage caused by the passage of years and some irresponsible people.

After a long negotiation between the residents of the area and the Malaga City Hall they finally decided to train a group of employees of the municipal transport company (EMT) to recover the history of public transport in the city.

But it won’t be an easy task because of the current damages: wind has curved the wooden sides, the floor was fired by vandals recently, some regulators were lost and other important pieces are broken. Fortunately, the main engine is almost in perfect conditions.

A huge crane was needed to avoid any damage while moving the tram. It’s already inside the EMT’s garage, where it will be repaired. The repair works will last for at least one year or year and half and its final destination remains a mystery.

The relocation of the historic tram has changed the current landscape of this area of Malaga city. That’s why some people is already thinking about repacling the old tram by another typical monument of the city, perhaps a jabeque (a small fishing boat) is the best option.

The Spanish Opt for Home Territory in Easter Trips

From 14th to 17th of august, medieval fair at Fuengirola´s castle Sohail